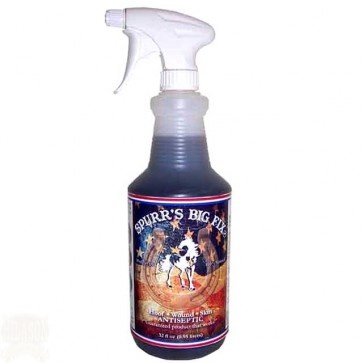 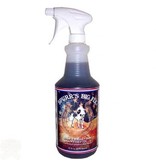 Spurr's Big Fix was developed and perfected by David and Kathy Kimbrough in the heart of Alabama horse country. In addition to both being lifelong horse enthusiasts and animal lovers, David is a highly respected, working farrier with over 38 years of experience. Being frustrated by the lack of positive results from the number of hoof products on the market, David and Kathy took it upon themselves to come up with a recipe that would meet, not only the needs of a horse's hoof, but would also address many common skin and wound conditions, as well. After an ideal formula was scientifically developed under the supervision of a chemist, Spurr's Big Fix underwent rigorous testing ensuring that it was both effective and safe. Today, Spurr's Big Fix has been thoroughly tested, both in the field and in the lab. It has been endorsed by numerous horsemen and women. With a completed formula in hand. Bruce Conley, long time friend of the Kimbrough's entered the picture to assist with production, packaging and marketing. Bruce's invaluable production experience allowed the formula to be produced and marketed en mass. Bruce is not only a partner and a product evangelist, he also uses it daily on his small herd of Miniature horses. Cattlemen swear by Spurr's Big Fix for treating "Hoof Rot". Hoof Rot strikes in wet conditions. Typically in Winter and Spring, or whenever cattle are running on bottom land. Cattlemen who use it see great results even after the initial application. Ideal for use on open wounds after castration! A cattle ranch running approximately 3,500 head of cattle has been using Spurr's to treat the open wound after they castrate their bull calves. After switching from Biodine to Spurr's Big Fix the calves have responded more favorably and have healed quicker. Ideal for various injuries on cattle! We have a cattle rancher who treated a leg injury, probably from barbwire, by just riding up beside the calf and treating it from the saddle. Because you couldn't walk up to the calf, but could ride up next to it on horseback, they set the sprayer on stream instead of spray and could treat the calf without getting off their horse. The results were amazing on how quickly the calf healed. Excellent for treating the navel cord on newborns! It couldn't get any easier treating the navel cord on newborns with Spurr's Big Fix simple to use spray nozzle.

Add your review
0 stars based on 0 reviews
By using our website, you agree to the use of cookies. These cookies help us understand how customers arrive at and use our site and help us make improvements. Hide this message More on cookies »